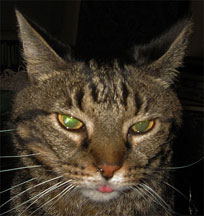 Older cats are prone to appetite or digestive problems, and those become more common with hyperthyroid cats, whether due to the medication or something else. Luckily, there are quite a few things that you can do that may help, things that are fairly easy, fairly inexpensive, and low risk (as long as you follow dosing guidelines). If the situation isn't too bad, a cat that's eating, just not enough, or eating well but having trouble with things coming out either end in ways they shouldn't, then you might try one or two items at a time. However, there are times when the shotgun approach is better, give it all and cut back later.

For a Hyperthyroid Cat Not Eating

If you've recently started treatment or increased the dose of methimazole, consider the possibility of an overdose causing hypOthyroidism. If using pills, it may be the pills causing the problem since digestive upset is the number one side effect of methimazole pills. It may be necessary to stop the med and restart later at a lower dose.

The problem is often stomach acid combined with nausea, and there are several short term and long term approaches. If the cat is throwing up early in the morning (any time there has been more than 5 hours between meals), stomach acid is likely. If the vomit is clear to white foamy liquid, that also suggests stomach acid. Nausea often shows no clear symptoms other than the cat not eating, but you may see lip-licking, or the cat may move away from food quickly.

Stay in touch with your vet, but here are the primary things that I would do for our cats in such a situation:

1. Stop the methimazole entirely (if using it). If a cat has been on methimazole for an extended time (over a year), it may be better to simply cut back for a while or switch to transdermal or liquid.

2. Give ¼ of a 10mg famotidine (Pepcid) if available. It's best given before bedtime to cover the over-night period when cats tend not to eat as well even if food is available. (The 20mg version is more commonly found, so read the label carefully. Also, famotidine should be the only active ingredient. Famotidine is not readily available in the UK and some other countries, so ranitidine (Zantac) is more commonly used. Dose for cats is 1.5 to 1.75 mg per pound (3.5 mg//kg) every 12 hours.

3. Give Cerenia or ondansetron for possible nausea. You get these from the vet. I prefer using Cerenia, but other people have more success with ondansetron. Note that when giving Cerenia, the taste will make some cats drool afterwards. Don't get too excited about it.

4. Give ¼ to ½ of a 10mg ceterizine (Zyrtec) as an appetite stimulant once a day. ceterizine is the over the counter option. For something a little stronger, ask your vet about cyproheptadine. (Some vets prefer mirtazipine, which is stronger, but it also has a much higher rate of side effects.)

5. Raise food and water dishes 2-4” off the floor so the cat doesn't have to lower the head below stomach level.

6. Try various foods. Anything that's not actually toxic to cats is okay for now even if you wouldn't use it long term. (Toxic includes onions, chocolate, and artificial sweeteners. I would also avoid pork/ham since that seems to be an issue for some cats that are already having issues.) In addition to various cat foods and treats, try fresh baked chicken from a deli (remove skin), sardines, yogurt, and try heating canned cat food, adding water, etc. Stage One/early stage baby food can be great, but read the label carefully to make sure there's no onion or onion powder, and I would stick with chicken, beef, or turkey.

In most cases, this will do the trick, although it may be 24-36 hours before you see much improvement, especially if the cat has gone hypOthyroid since it takes a while before the methimazole is out of the system. If more help is needed:

A. B-12 injections given at home. These can help even if the B-12 is normal, and they are fairly easy to give. Have your vet show you the first time. B-12 is also good for kidney support. Even if a cat doesn't test low on B-12, these injections may help.

B. 100-200mg of slippery elm 1-4 times a day. This can be found at most supermarkets, drug stores and health food stores. It usually comes in 400mg capsules, so just open one and pour a little on food. Dose doesn't have to be precise. If the cat won't eat it that way, you can mix with water and syringe it into the mouth. (Use a 3ml or 10ml feeding syringe, also found in drug stores and the pharmacy section of supermarkets. When syringing, always do so at an angle, not directly into the throat, and don't go too fast...unless using a small amount of liquid. The capsules usually include magnesium stearate to prevent clumping, but don't buy versions with other vitamins or herbs added. (Allergic reactions are uncommon but not unknown. They aren't immediately life-threatening, so slippery elm is a very low risk approach.)

Slippery elm causes the digestive tract to form an additional layer of mucous, which provides more protection and lets inflammation heal. Some think this layer may reduce absorptions of meds, but there is no documentation. Since it aids the digestive tract, it could also increase absorption. I suspect that it's pretty much null overall, but it's a guess in the absence of research. However, no one in the groups has ever reported an issue.

C. Use a good probiotic. This means one with at least 3 strains of bacteria. One with 5 or more is better. This is a good idea for any older cat in my opinion. Just be sure to start at about ¼ the suggested dose and work up since starting too high can cause gas and bloating. You may find that you don't need more than half the suggested dose. Take note that if the probiotic improves digestion, it may also improve absorption of meds, including methimazole, so you'll want to keep an eye on the T4. Douglas Pro 40 Billion, Proviable, and Vetri Science Mega Probiotic are among the good ones. Forti Flora can help as an enticement to eat but is not good as a probiotic with only one strain of bacteria and lots of animal digest as filler.

D. If a cat goes more than 3 days without eating, they enter the danger zone for hepatic lipidosis (fatty liver disease). It becomes likely at 5-7 days. Preventing and treating fatty liver disease is a matter of eating, so if nothing has worked by the 3 day point, you should consider syringe feeding (also called assist feeding for force feeding). No, cats don't like it, and you'll take a long guilt trip, but it has saved many cats. The problem is that not eating creates conditions that reduce appetite, so getting enough food in frequently enough is essential to breaking the cycle. If that means syringe-feeding, so be it. Sometimes a single feeding is enough to break the cycle, and other times, it takes days of feeding. Keep in mind that you need to get at least the equivalent of 3 ounces of canned food in daily. Most people under-estimate. You'll find many videos on assist feeding on YouTube. Watch several, and pick the ideas that work for you. (And if you reach this point, you should already have been in touch with your vet several times.)

All of the ideas on theses lists are low risk at these doses. The high risk is not eating, so don't be shy about trying multiple things at once if need be. Most of the ideas here will be familiar to your vet, while things such as slippery elm may not be. Oddly, some vets hesitate to treat for nausea unless a cat is actually throwing up frequently, but since Cerenia and ondasetron are both low risk overall, I suggest pushing for their use. The same can be true about B-12 injections. Working with your vet doesn't mean just doing what you're told without thought, but it does mean letting your vet know what you're doing, not doing, and just making sure everyone knows what's going on. You need the vet's input, but they need yours as well. Remember that the important thing is the health of the cat involved as well as the health of later cats who may benefit from what's learned. Ego and guilt trips need to be set aside.